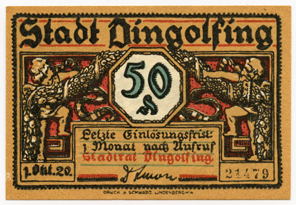 It was produced by German towns, villages, and municipalities from the end of the First World War until the mid-1920s, when the state bank (Reichsbank), struggled with wartime shortages and post-war hyperinflation.

During the war, Germany’s population had to substitute rubber for petroleum, substitute coffee for acorns, and even substitute clothing and underwear, made from paper. But above all, there was a desperate shortage of metal, and early on in the war individuals began to collect small denomination Reichsmark coins, because the value of the metal they were made from had exceeded their face value. As the war progressed, metal was needed for more pressing issues than currency, such as the production of war supplies. By 1919 low-value coins had disappeared, and substitute money, Notgeld, made from paper rather than metal, was issued by municipalities and other regional bodies. After the war, Notgeld became an important form of currency again, when Germany experienced disastrous hyperinflation which peaked in 1923.

The notes are double-sided and printed with their monetary value, information about the village, town or province of issue, and colourful illustrations. Because of these rich illustrations that appeared on these notes, they were collected and hoarded from the beginning of their issuance.

The text and images on Notgeld express regional memory and identity. They are illustrations of local pride, intended to promote a city’s attractions and stories. The notes were meant to awaken the curiosity of tourists and travelers and to convey the civic pride of a town’s inhabitants. Through a glimpse at some of the banknotes, the public mood from a particular part of Germany becomes tangible. Some banknotes are highly humorous or sarcastic, even making fun of Notgeld itself. Others are more earnest, and then there are examples that are rather sober and less ornate.