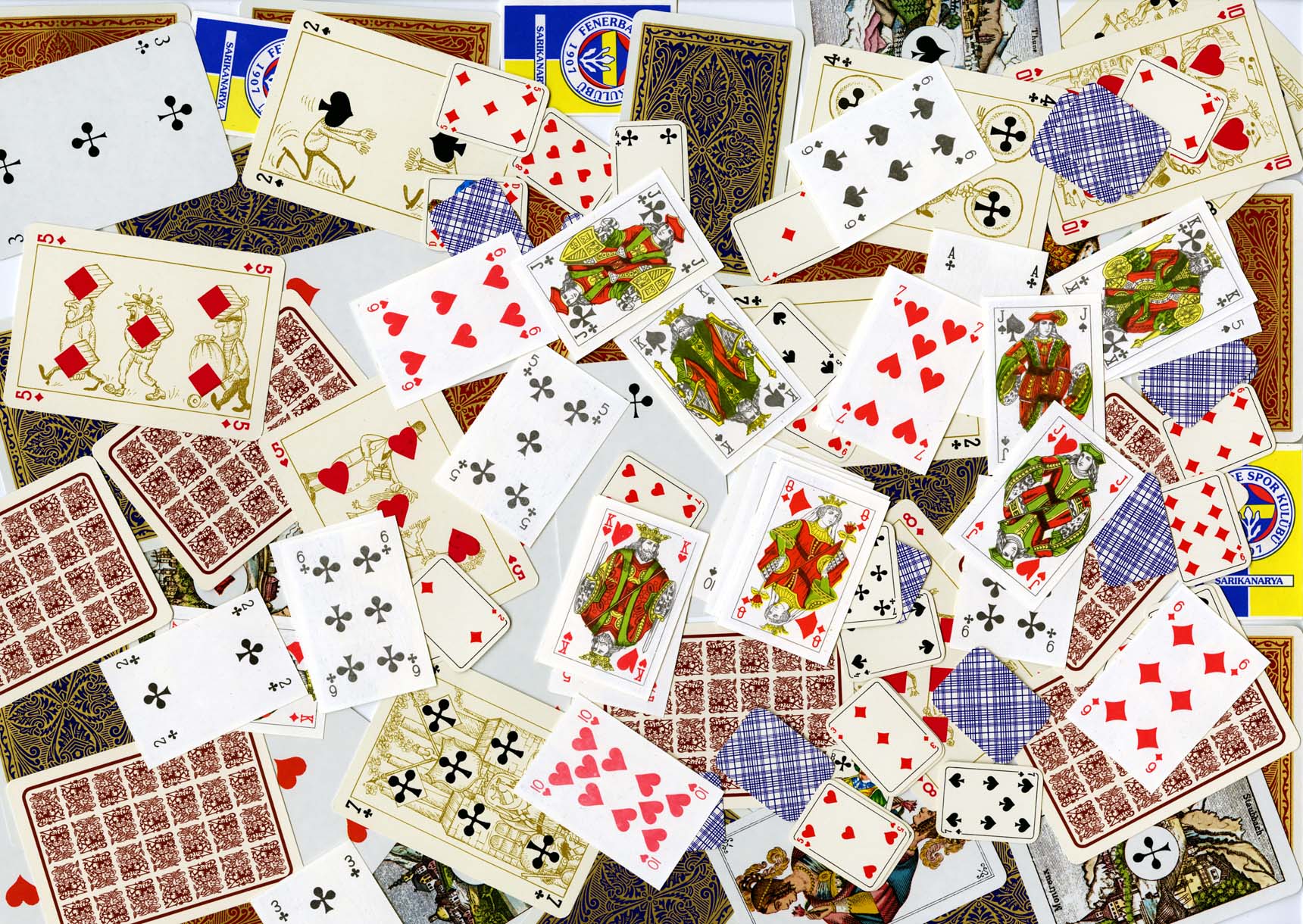 The Strens collection has a variety of playing card book's. Some are about the history of the playing card, while others are about games. Here are a few examples of what can be found in the collection:

The Richard Johnston Collection of Playing Card  compliments the resources in the Eugene Strens Recreational Mathematics Collection. The collection comprises hundreds of unique and rare decks of cards. These cards range from standard playing cards to tarot games to games cards. There are over 600 decks, and they are available to be researched, viewed and played with. Here are a few examples of some of the interesting cards:

How Playing Cards Are Made

Here is a video from the world's leading playing card producer, Bicycle. The company has become the card expert and it has been producing cards for over 125 years. This video takes you behind the scenes, and shows how a deck of playing cards is made.

History Of The Playing Card

The History of Playing Cards

Playing cards were circulated throughout different regions in the world very rapidly. It appears that cards spread through India and then into Egypt, and finally into Europe where they have had an interesting and turbulent history. Armies were one of the main ways of transporting cards since they were easily carried and were a good source of entertainment. Trade with Egypt also contributed to the spread of playing cards in Europe.

The design of playing cards varied depending on where they were made. For example, Italian and French playing cards had swords, cups, and coins. Whereas German playing cards focused more on nature and used acorns, leaves, and hearts. In the 15th century, efforts to simplify the design of cards were made by French card-makers. These card-makers settled on having only two colors: red and black, and used symbols like hearts, spades, diamonds and clubs. This design has become the basis for modern playing cards.

There are some differences with the original packs of playing cards compared to what we have now. Originally, there were no Queens; the royal courts were strictly male dominated. The cards had a King and two Marshalls. Italian, Spanish, and German cards are generally still made in this form.

At the end of the 14th century, playing cards were causing a frenzy in Europe.  As a result of cheaper printing methods, cards were being used by all classes. Cards were used for recreational purposes, but also for gambling. The Church and state were growing concerned that gambling with cards would increase crime and immoral behaviour among the lower classes. In Florence in 1376, the state banned the game naibbe. In 1377 Paris banned playing with cards on workdays. In 1378, Germany issued a fine for gambling with high stakes. In Sienna, St. Bernadine preached against playing cards so convincingly that thousands of citizens burned their cards in a public bonfire. In the 17th century, England introduced a tax on playing cards. The original tax works out to be about $5 in modern monetary value, but it increased over time to amount to about $25. Eventually, the ace of spades was taxed against card-makers. If a card-maker wanted to include the ace of spades in their deck, they needed to pay the government tax. Some card-makers were able to forge the ace of spades, however committing this crime was met with severe consequences. One man was hung for forging the ace of spades, and this is why the ace of spades is often believed to be unlucky.

Blank cards were the cheapest paper at the time and were therefore used for notes, love letter; and as invitations. During the 15th century in the Netherlands, poor mothers would often use blank cards to write messages for their children when dropping them off at an orphanage. In many cases, the card would be either torn in half or left full. If the card was torn in half, this indicated that the mother would eventually return to claim the child. However, if the card was full then the child was abandoned for good.

The suit in cards that are still used in modern times have been linked to a variety of conspiracy theories and secret societies relating to the occult. For example, some believe that the 4 suit system represents the four seasons. 52 cards in a deck relates to the number of weeks in a year. 13 cards per suit represents the 13 cycles of the moon. In addition, some theorists believe that the Freemasons imposed their symbolism into the decks as a form of communication. In the hand of the Jack of Hearts is a sprig of acacia which is important in Masonic rituals. Roses are held by the queen and this is also symbolic for freemasons. However, it does not appear that these symbols were intentionally created by the freemasons.

Much of the information provided is available in the following documentary:

For those who are interested in viewing the Richard Johnston Playing Card Collection, a listing of every deck of cards is available in the following document, or you may contact us at: archives@ucalgary.ca