The Strens Recreational Mathematics Collection includes the personal papers of famous mathematicians. Here are some brief biographies of the mathematicians indicating their research interests.

Martin Gardner was an American math and science writer. He was born in Oklahoma in 1914 and died in 2010 at the age of 95. Gardner's main research interests within recreational math included micromagic and stage magic. Gardner has often been described as the sustainer of recreational math in North America since he dedicated much of his life to the development of public interest in recreational math pursuits. Gardner tried to spread awareness of recreational math by writing a "Mathematical Games" column for the journal "Scientific American". He was also very interested in philosophy, writing and religion. Gardner's works can be found in the Leon Bankoff file listings in the right column. 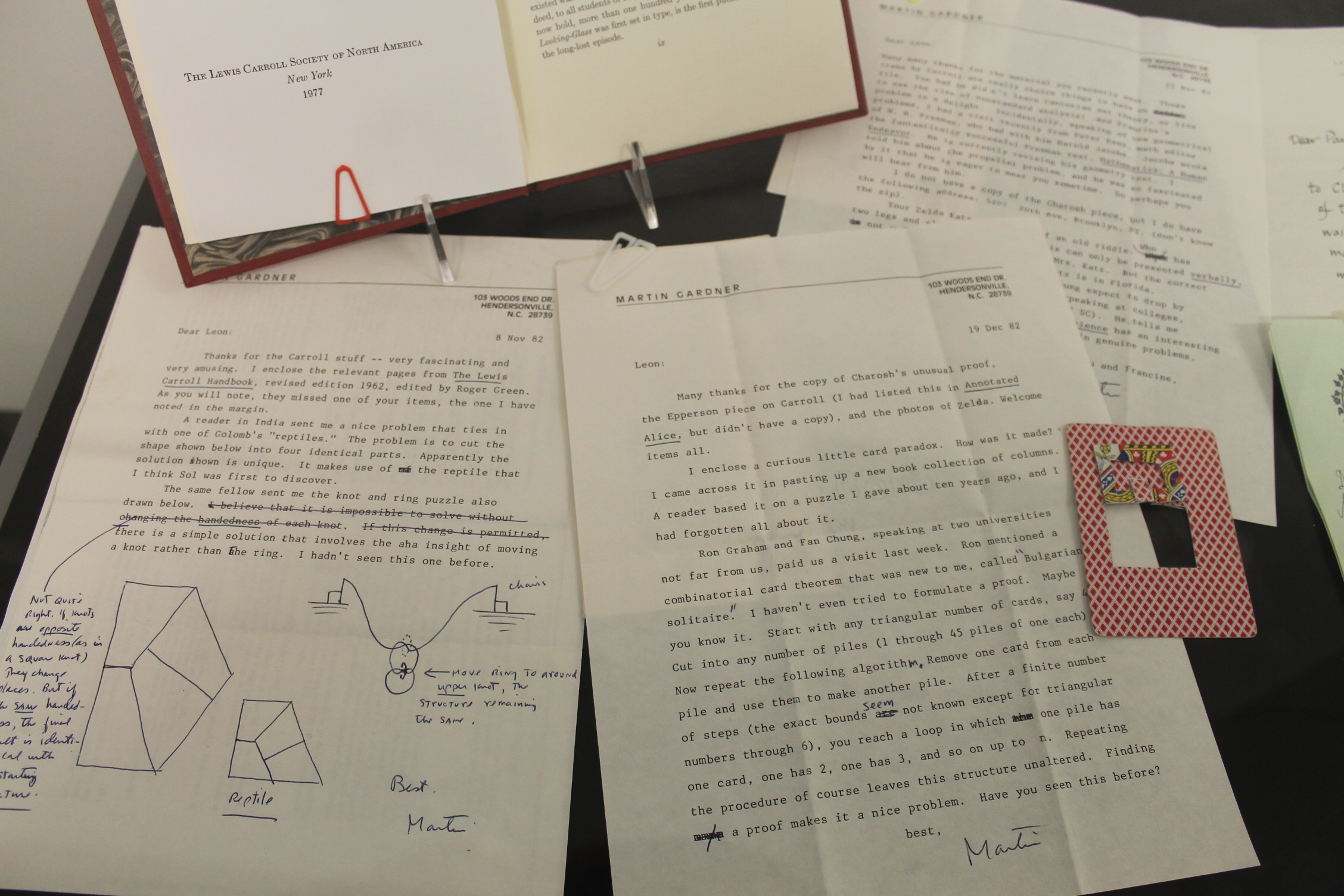 Leon Bankoff was born in New York City. After high school, he studied dentistry in Los Angeles and eventually became a dentist to the stars! When Bankoff wasn't performing dental work he was pursuing his most beloved hobby of recreational math. Bankoff often collaborated on math problems with Paul Erdős, a famous Hungarian mathematician. Bankoff became the editor of the "Problem Department" of Pi Mu Epsilon Journal and held this position for thirteen years. Special Collections has an extensive collection of his private works and papers. Here are some samples:

Clayton Dodge was born in Stoneham, Massachusetts in 1931. He was an American problemist and professor of Mathematics. Dodge attended Harvard but graduated from the University of Maine with a BA and MA in Mathematics. He later taught math at the University of Maine for forty-one years. Dodge's mathematical interests included geometry, problems, teacher education and number theory. Dodge wrote many papers and produced six textbooks. Dodge also produced software for computers. Much of the Dodge collection in Special Collections centres on his interests in geometric figures, and the 'arbelos'.

David A. Klarner was an American mathematician, author and educator. He was born on October 10, 1940, in Fort Bragg, California and spent his childhood in Napa. Klarner knew he wanted to be a mathematician in grade school and attended Humboldt State College as an undergraduate. He obtained his M.A and Ph.D from the University of Alberta. Eventually, he become a professor at the State University of New York, Binghampton, and a visiting professor at the University of Waterloo. He finished his career at the University of Nebraska where he taught computer science. Throughout his early childhood and his career Klarner had an interest in recreational math. He published articles on polyominoes and a variety of other math game topics throughout his life. Special Collections has a collection of his works, mainly correspondence, articles and papers, and notebooks.

Charles Trigg was an American engineer, mathematician and educator, born 1898 in Baltimore, Maryland. Educated in engineering, mathematics and education at University of Pittsburgh, University of Southern California and University of California at Los Angeles. He worked as an industrial chemist and engineer between 1917-1943, and as an educator and administrator between 1946-1963. Trigg served in the United States Navy during World War II. Book review editor of the Journal of Recreational Mathematics. Considered one of the foremost recreational mathematicians of the twentieth century. Trigg's collection consists of correspondence; research material on a broad range of mathematical topics; manuscripts of mathematical articles, notes, calculations and solutions to mathematical problems; and published work.

John Hendricks was a Canadian meteorologist and amateur mathematician, widely considered the world's foremost expert on magic squares. Hendricks was born in Regina Saskatchewan, September 4, 1929, and died in Victoria, British Columbia, July 7, 2007. He obtained a degree in mathematics from the University of British Columbia in 1951 and began his career as a meteorology instructor in the N.A.T.O. flight training program. He worked for the Canadian Meteorological Service for thirty-three years, retiring in 1984 in Winnipeg, Manitoba and then in Victoria in 1996. He made many published contributions to meteorology, statistics and climatology and participated in voluteer service groups including the Monarchist League of Canada; he was the recipient of a Canada 125 Medal in 1993. His lifelong interest in recreational mathematics began at the age of thirteen when he started collecting magic cubes and squares. He was the first person in the world to successfully make and publish five and six-dimensional magic hypercubes as well as inlaid magic cubes and squares; he was also the first to publish diagrams of all 58 magic tesseracts of order 3. He published many articles on these subjects in the Journal of Recreational Mathematics as well as in other journals; he also self-published many books and papers. In retirement, he gave public lectures on magic squares and cubes in schools and to teachers' conventions in Canada and northern U.S. He developed an enriched mathematics course on magic squares and cubes which he taught for seven years at Acadia Junior High School in Winnipeg. He only began using a personal computer for his calculations in 1996 when Parkinson's Disease made it too difficult to use his hands; until then his only aid for his work was a programmable calculator. Hendrick's collection consists of manuscripts and published works by J.R. Hendricks, a compact disk containing many of his publications, works about him and works by others.

If you are interested in using the materials available by these mathematicians, then please contact us at: archives@ucalgary.ca

The following lists contain information about the contents in each mathematican's collection. Please browse through these listings and make notes of anything you're interested in.